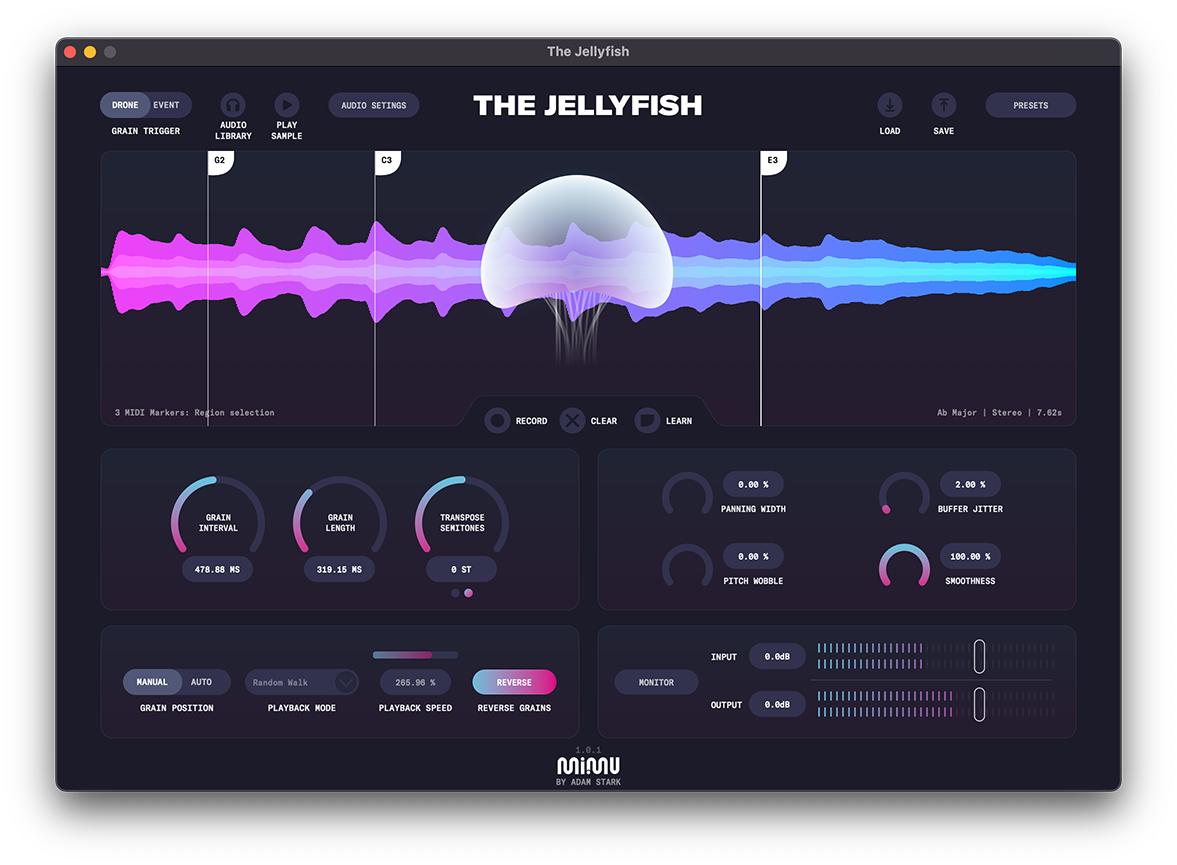 What is The Jellyfish?

The Jellyfish is a granular synthesis engine with the ability to receive a live audio input. Live-record your voice or instruments and then repurpose that audio using the The Jellyfish to create drones, soundscapes and pulses in real-time. The Jellyfish is available on both Mac and Windows platforms, as an Audio Unit, VST3 and as a standalone plugin.

NOTE: The following DAWs have been tested - if you do not see a DAW on this list, it may still be compatible but we have not tested every possible DAW. Additionally, these results are only our experience and we may be mistaken or the DAWs may have implemented support since the time of writing this document

Granular synthesis is the process of taking short slices of audio - or 'grains' - from a longer section of audio. These short grains are typically less than 1 second in length, often much shorter. They are then triggered at certain intervals, sometimes overlapping each other

What is a Grain?

If we have a piece of audio:

we can take a small slice of it (highlighted in pink):

which leaves us with a short section of audio like below: 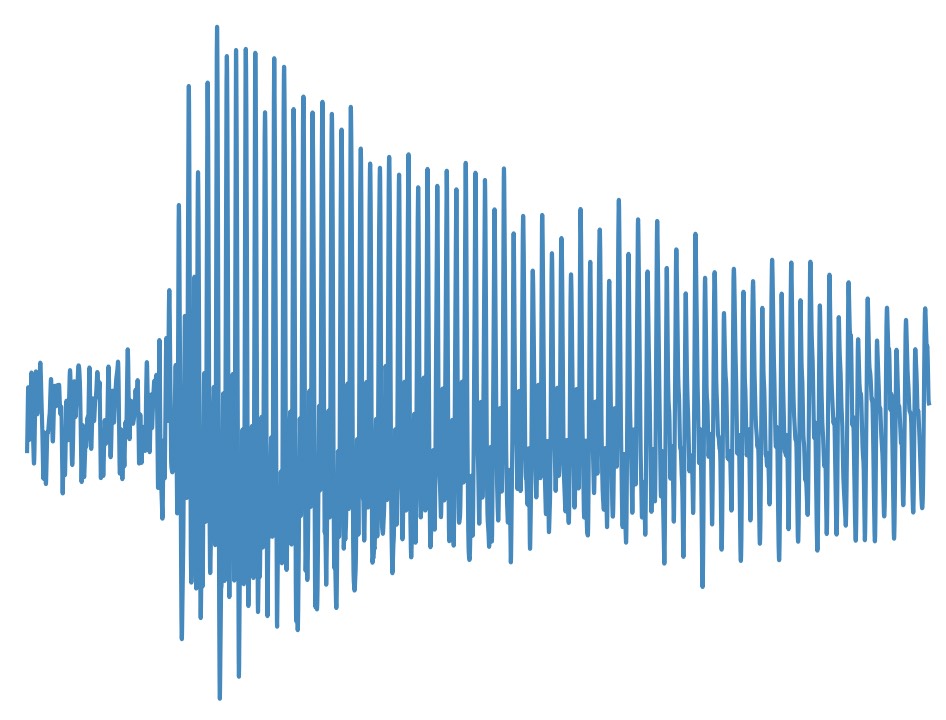 We then apply an 'envelope' - the red dotted line - to this audio slice: 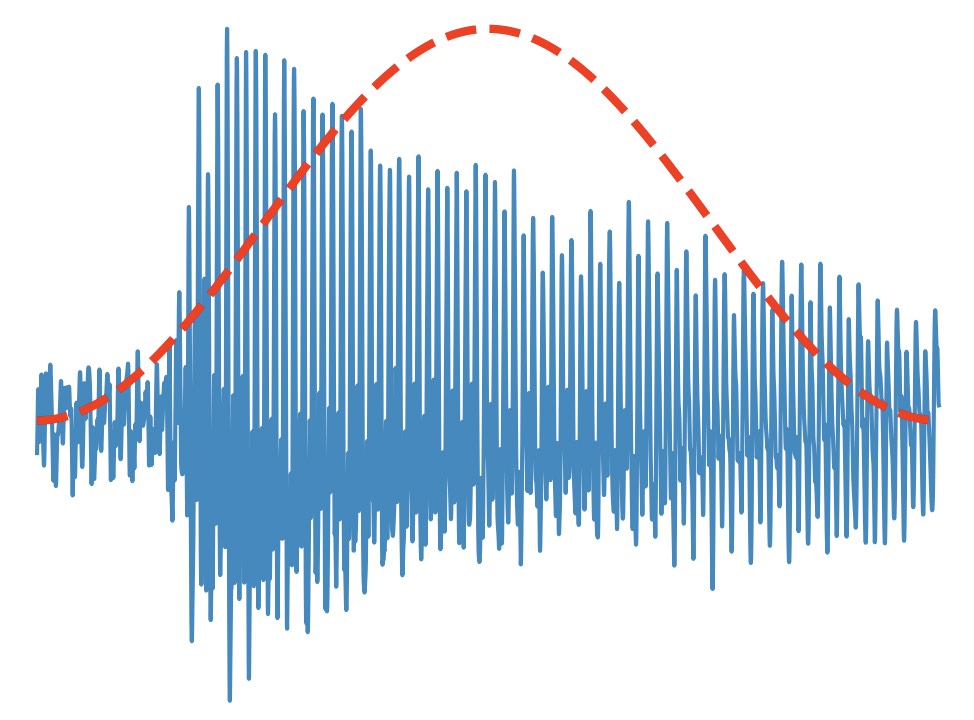 ...and the result is a 'grain' of sound, as seen below 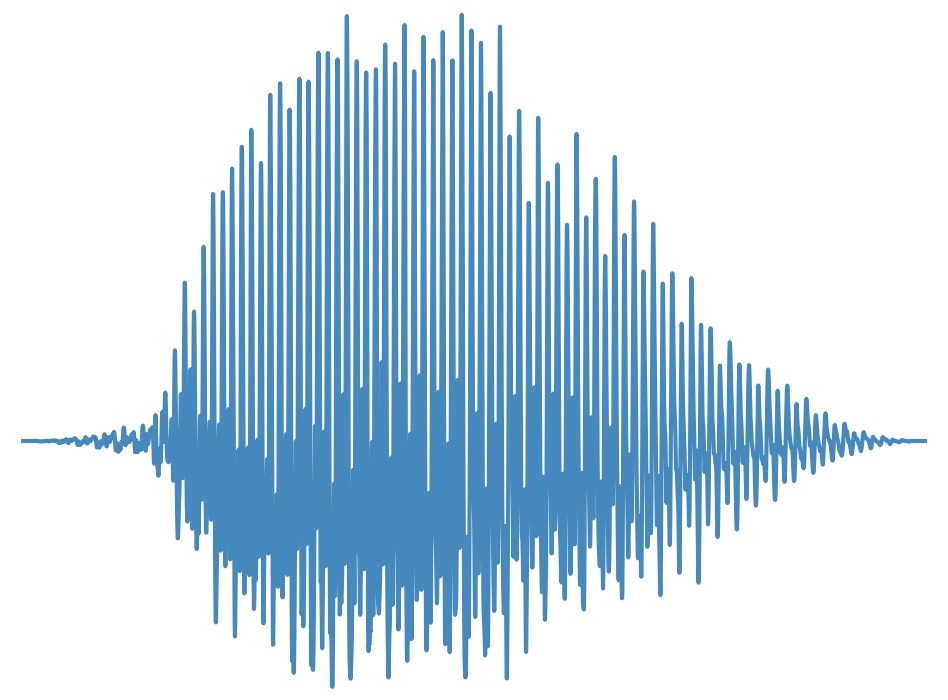 From Grains to Granular Synthesis

We can trigger grains at different time intervals, which allows us to have either a sequence of 'pulses', or if the grains are triggered very quickly, overlapping grains resulting in a drone.

We can then vary some parameters of the grain, for example:

Getting Audio Into The Jellyfish

You can get audio into The Jellyfish in a number of ways:

Drag and drop audio to the waveform area

Load an audio file via the 'Load' button on the toolbar

A very important control is the 'Grain Trigger' switch on the toolbar (see above). This puts The Jellyfish into one of two different modes:

Using these two modes you can either create continously evolving soundscapes, or instead make The Jellyfish responsive only to your input / control.

The waveform area shows the currently loaded audio, and the 'jellyfish' which is the positional control for the plugin.

Click and drag the jellyfish to move its position on the waveform. This will change the place — or 'buffer position' — from which grains are sampled.

There are also three buttons at the bottom of the waveform area:

In tempo-sync mode, the time between grains is instead measured in terms of the metric subdivision (1/4 note, 1/8th note, etc.)

The transpose control allows you to change the pitch of each grain. The buttons below the transpose slider switch between:

Each grain is given a random panning position. The panning width control determines how wide that panning is. If it is 0%, no panning is added. If it is 100% then panning positions can be up to 100% left or 100% right. Values in between reduce the amount of panning.

A random variation in the position of each grain in the buffer. Small amounts add light variation that adds to the complexity of the sound. Larger values cause much more wild variations as the grains are selected from a wider range of locations in the audio

A random pitch variation added to each grain. If a short grain interval is used, leading to a drone, then small amounts of this pitch variation can add an effect similar to a chorus

This parameter controls the shape of each grain. Smooth grains will have a soft, slow attack. Less smooth ones will have a faster attack, leading to a sharper sound

Selects the movement behaviour of the Jellyfish when the 'auto' grain position switch is active:

Controls the speed of the movement of The Jellyfish when it is in 'auto' grain position mode.

When active, each individual grain is played in reverse rather than forwards

You can record live audio into The Jellyfish, and then immediately explore the newly recorded sound using The Jellyfish's creative tools. (NOTE: This feature is only available in DAWs that support routing audio to instrument plugins)

How to Record Audio

1. Route Audio to The Jellyfish - The Jellyfish is an instrument plugin, and so in a DAW it receives audio via a sidechain input. The way that you will get audio into the plugin will depend on the DAW you are using. You may find the section Audio Input for Common DAWs useful. Please note that some DAWs won't support routing sidechained audio to instrument plugins.

2. Verify Audio Input - You can check that audio is being received by the plugin on the audio input meter as highlighted below:

3. Use the 'Record' Button - Below the waveform you will find the 'record' button. Click once to start recording and once to stop:

To play The Jellyfish with a MIDI keyboard, you can assign MIDI markers to parts of the waveform, as can be seen in the image below:

There are two modes of behaviours with MIDI markers, depending on the number of markers:

1. Ensure that you have a MIDI controller connected that is able to send note messages (e.g. a MIDI keyboard)

2. Ensure that this device is enabled in your DAW or in the standalone version of the plugin. If using a DAW make sure that MIDI is reaching the channel on which you have The Jellyfish loaded

3. Click the 'Learn' button below the waveform to enter 'learn' mode

4. Move the jellyfish control to the positon in the wavform where you want the marker

5. Play the MIDI note you want to be associated with the marker. A marker should appear with the note you used, similarly to the below image:

6. Move the jellyfish and create any extra markers you wish to create (if any)

1. Click the 'Learn' button below the waveform to enter 'learn' mode

2. Click and drag on the MIDI marker you want to move, until it is in the position you require

1. Click the 'Learn' button below the waveform to enter 'learn' mode

2. Click on the MIDI marker you want to delete to select it

3. Use either the backspace or delete key to delete the marker 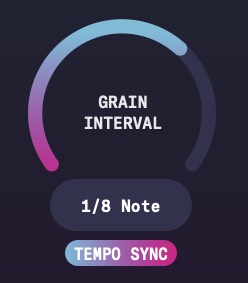 (NOTE: This feature is available in the VST3 / Audio Unit plugin only.)

In the VST3/AU version, below the Grain Interval slider is a button labelled 'Tempo Sync'. If you click this button, you will put the plugin into tempo sync mode.

The Jellyfish comes with a collection of 'core' presets that you can explore and enjoy. However, you can also create your own presets. This means any time you come across something you like, you can save it as a preset so it can be re-used in the future.

2. Choose 'Save Preset' from the menu

3. If this is your first preset, you will be prompted to create a new 'preset group': 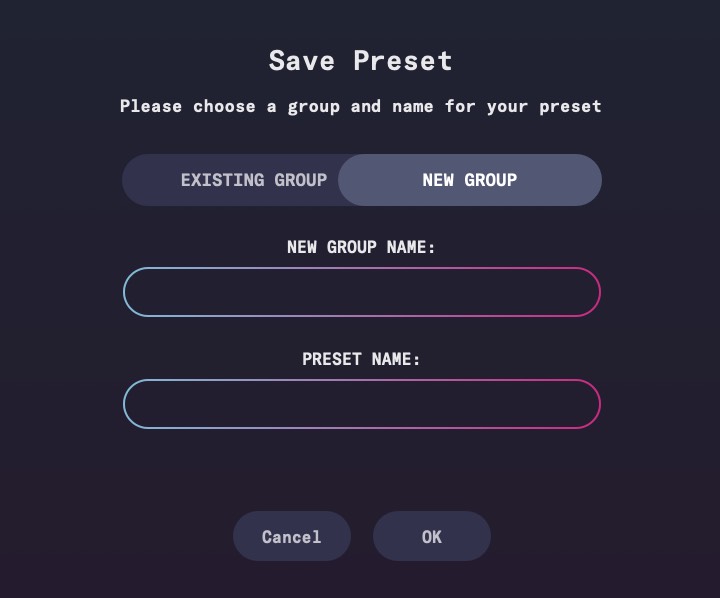 Preset groups allow you to create collections of presets of different types. Give it a name: 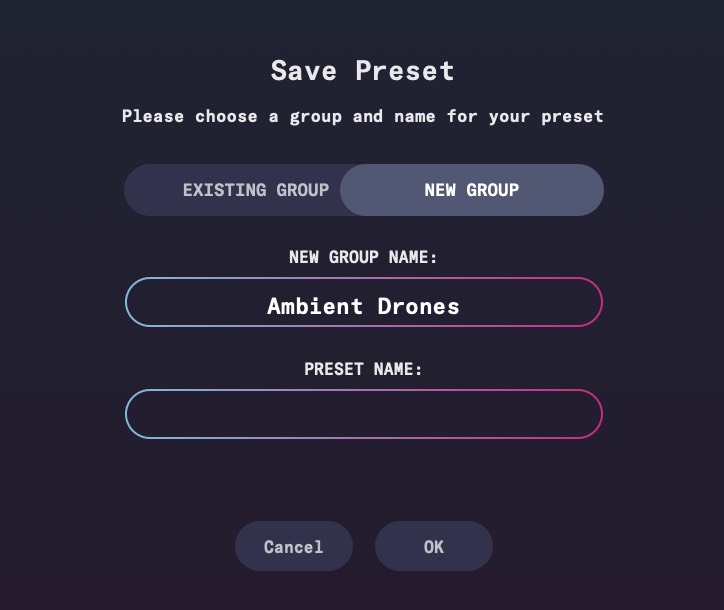 4. Now give the preset a name: 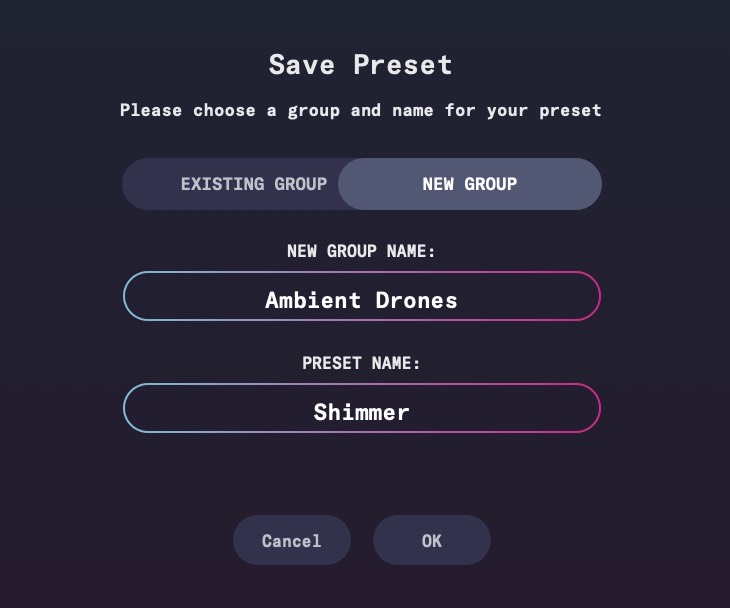 NOTE: next time you go to save a preset, your preset group will be available to choose from a drop-down menu. You can either use it, or create a new group by toggling to the 'New Group' mode at the top: 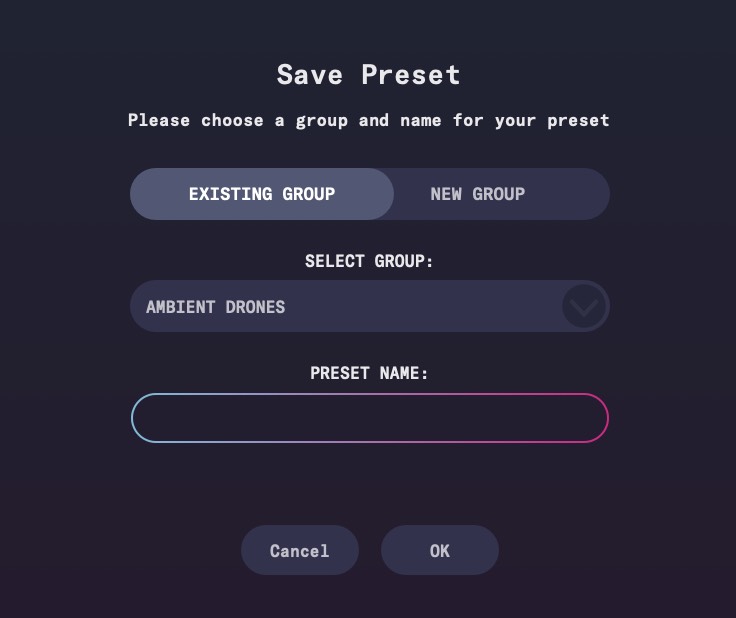 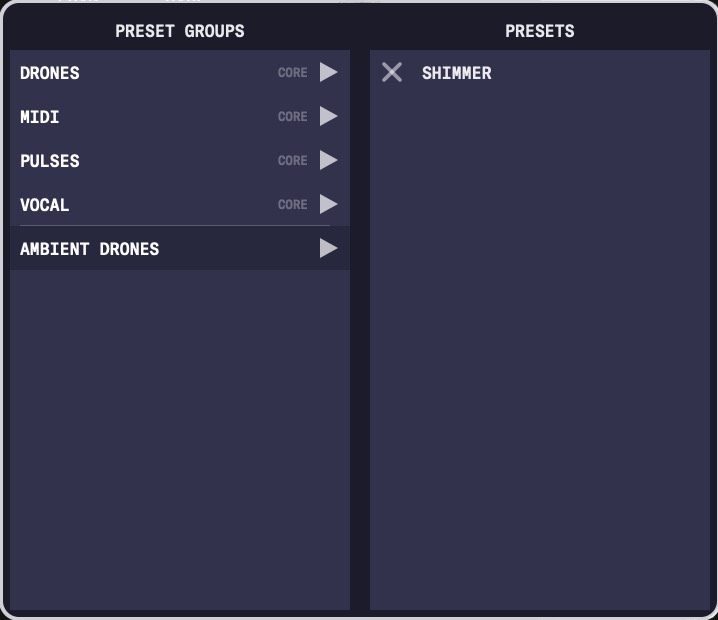 You can also delete a preset by clicking the 'X' to the left of its name.

If your DAW supports it, you can MIDI map to each of the parameters of The Jellyfish.

While this behaves similarly as for other audio plugins, a couple of parameters are worth highlighting:

Option A: Route Audio to The Jellyfish

On your audio input track, find the 'Audio To' drop-down menu and select 'The Jellyfish':

On the plugin in Ableton Live, find the 'Sidechain' input and select your desired audio track: 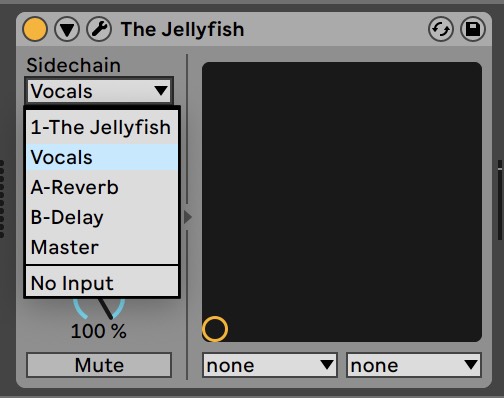 In the top right of the plugin, find the 'Side Chain' menu and select your input audio track: 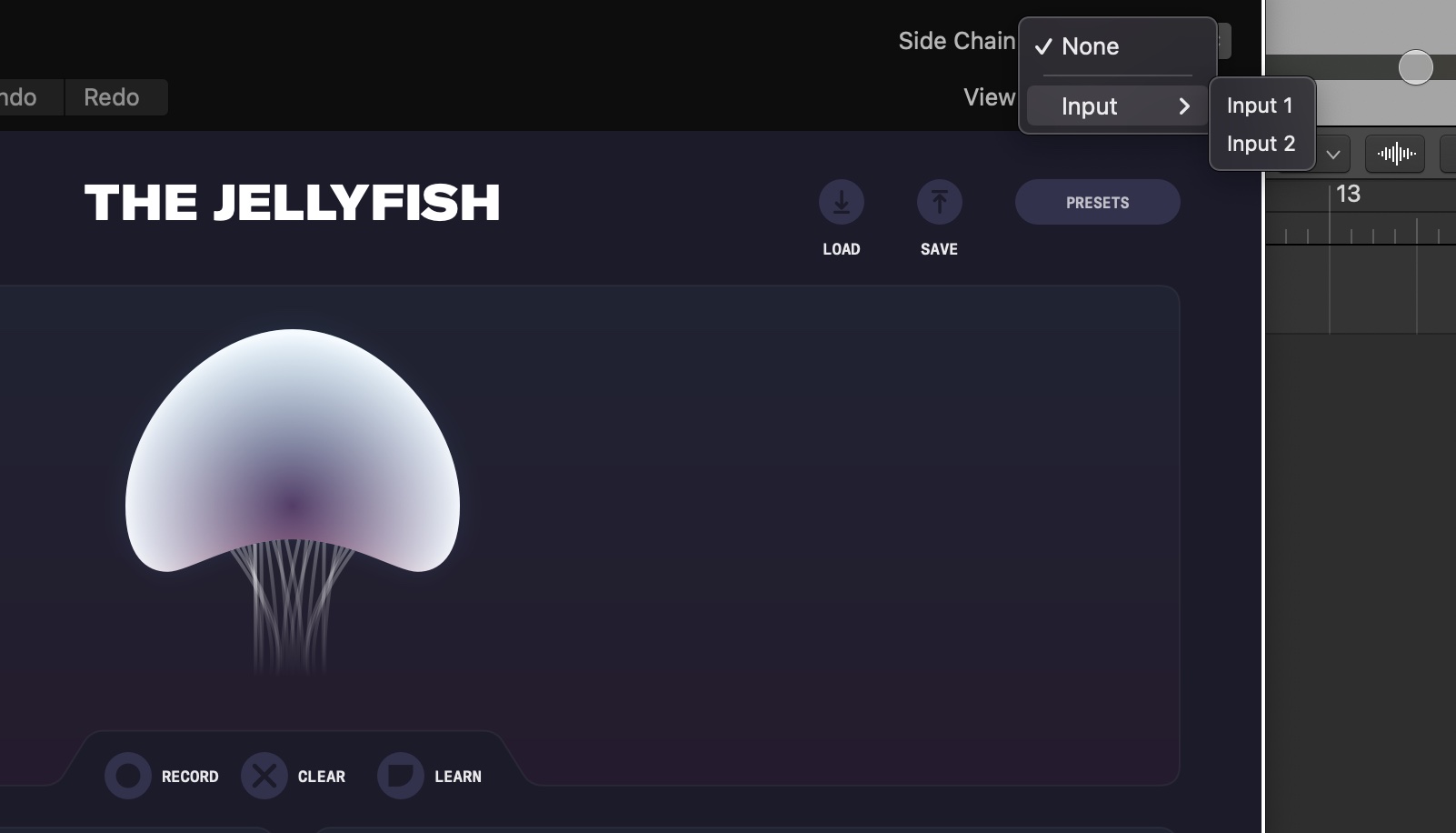